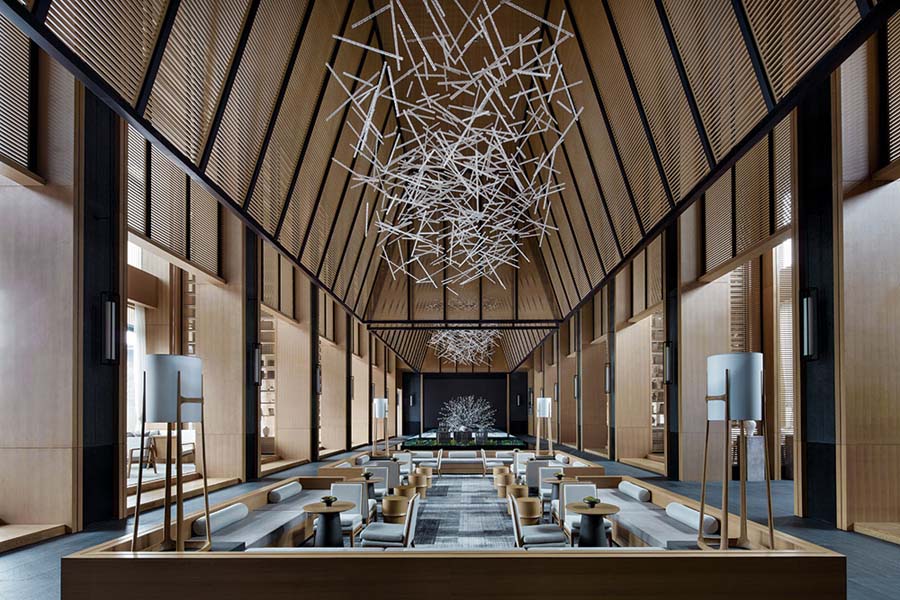 This Equilibrium is the great root from which grow all the human actings in the world, and this Harmony is the universal path which they all should pursue. Let the states of equilibrium and harmony exist in perfection, and a happy order will prevail throughout heaven and earth, and all things will be nourished and flourish.” This quote from the Book of Rites reflects Confucius’ view on the doctrine of the Mean. It represents the ideal state of harmonious interplay between yin and yang, between toughness and softness, and between humanity and nature. In their design of the Jinan Bocuishan sales center, Yi Chen and Muchen Zhang try to integrate culture and art into the space using pure and natural techniques of expression for harmony with nature based on the ancient idea of “rites”. They’ve created an ordered, graceful and Zen-style space imbued with Chinese culture as it echoes the history of ancient Shandong, the poetic charm and architectural style of Han Dynasty, and the essence of Eastern culture. They strive to interpret the Eastern style with their creation and build a spiritual home where the heart can be cleansed and return to a poetic state. This has given rise to an artistic space design rooted in Eastern culture for personal reflection. 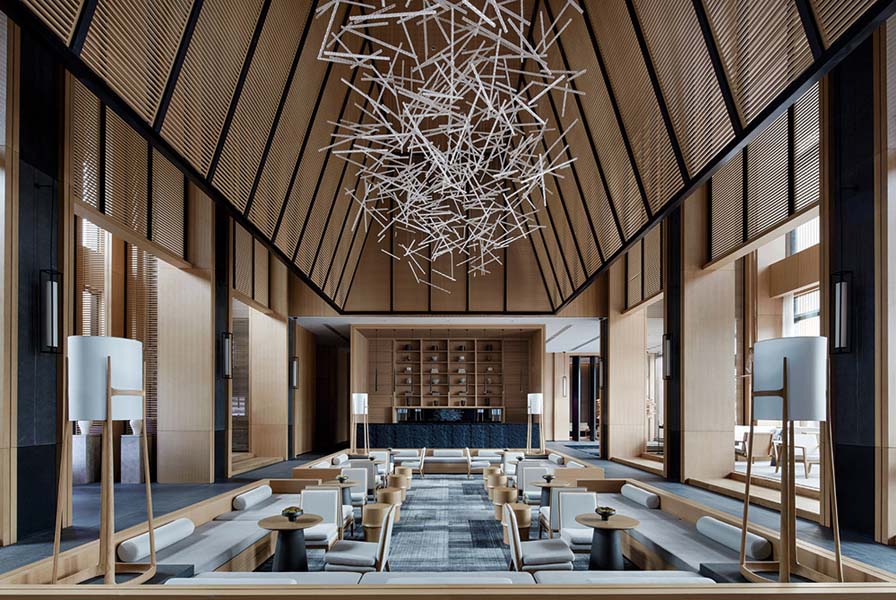 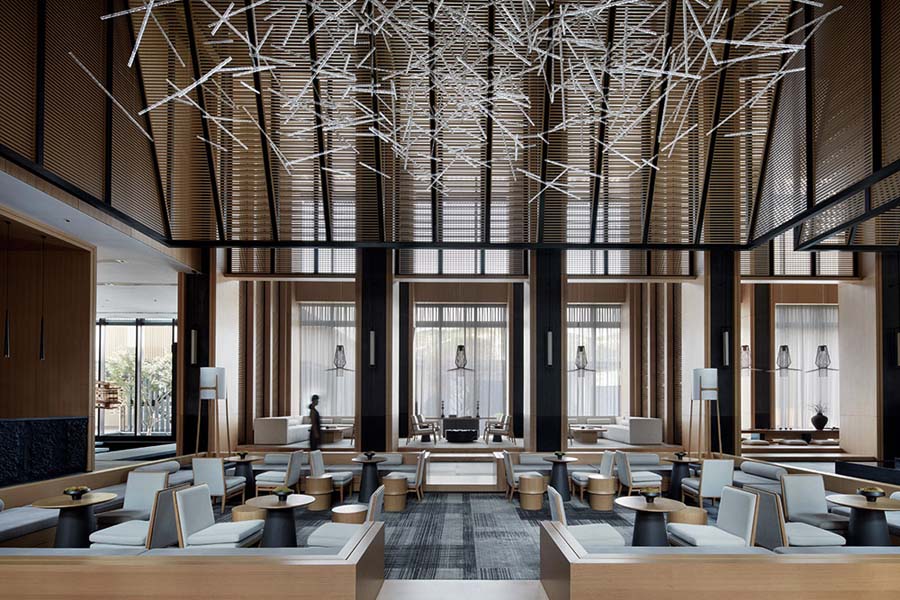 The dynamic and layout of the space follows the laws of nature, serving as an answer to the traditional Chinese aesthetics of harmony between man and nature. In the traditional shape of the Chinese character “回”, the pathways are symmetrically set across the central axis, as the main and supporting pathways, solemn and tranquil in a seamless pattern, enclose the overall space. The axisymmetric design and the pillar array standing on either side add to the vertical rhythm and horizontal smoothness of the space. The suspended timber frame and the grilles that reach the floor, which are inspired by the freestanding gate tower in Han Dynasty, are strategically arranged to act as partition walls for the functional areas. 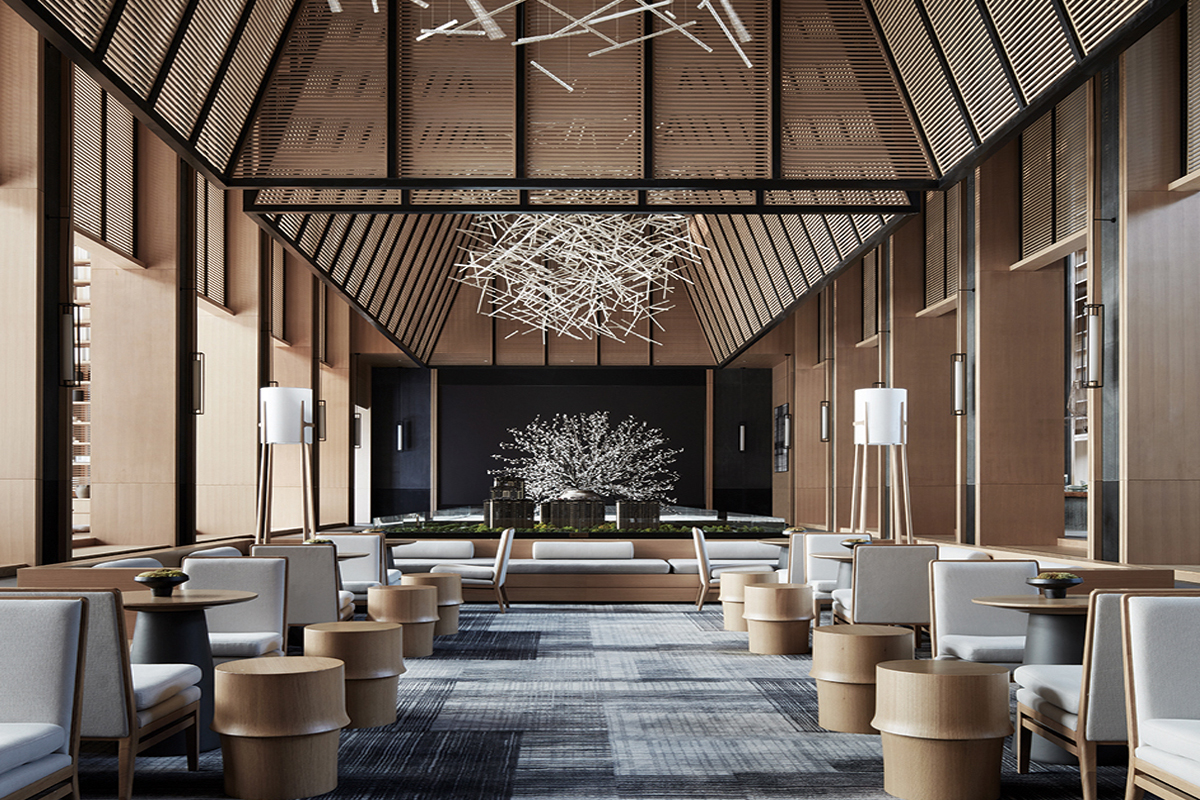 As light and shadow are intertwined across the space, the pillar array, serving as the focal point of the spatial dynamics, combines both ancient and modern aesthetics and demonstrates the unique eastern ideas of respect and ceremony. Daylighting is maximized in the space. Interlaced into an ethereal pattern, rays of light breathe life into the space just as the subtle interplay of water and ink
animates a traditional Chinese painting. The natural transition from the interior to the outdoor water garden perfectly blends the two together, giving rise to an impressive Zen vibe that lightens up the solemn Eastern style. From point to line to façade of the space, either concrete or abstract, exudes an exquisite eastern aesthetic characterized by simplicity, serenity and impermanence. 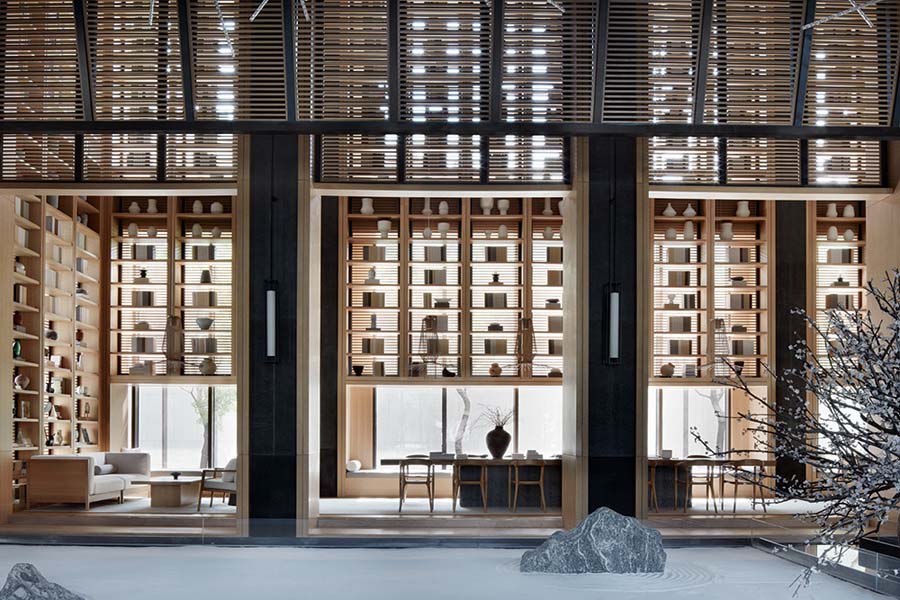 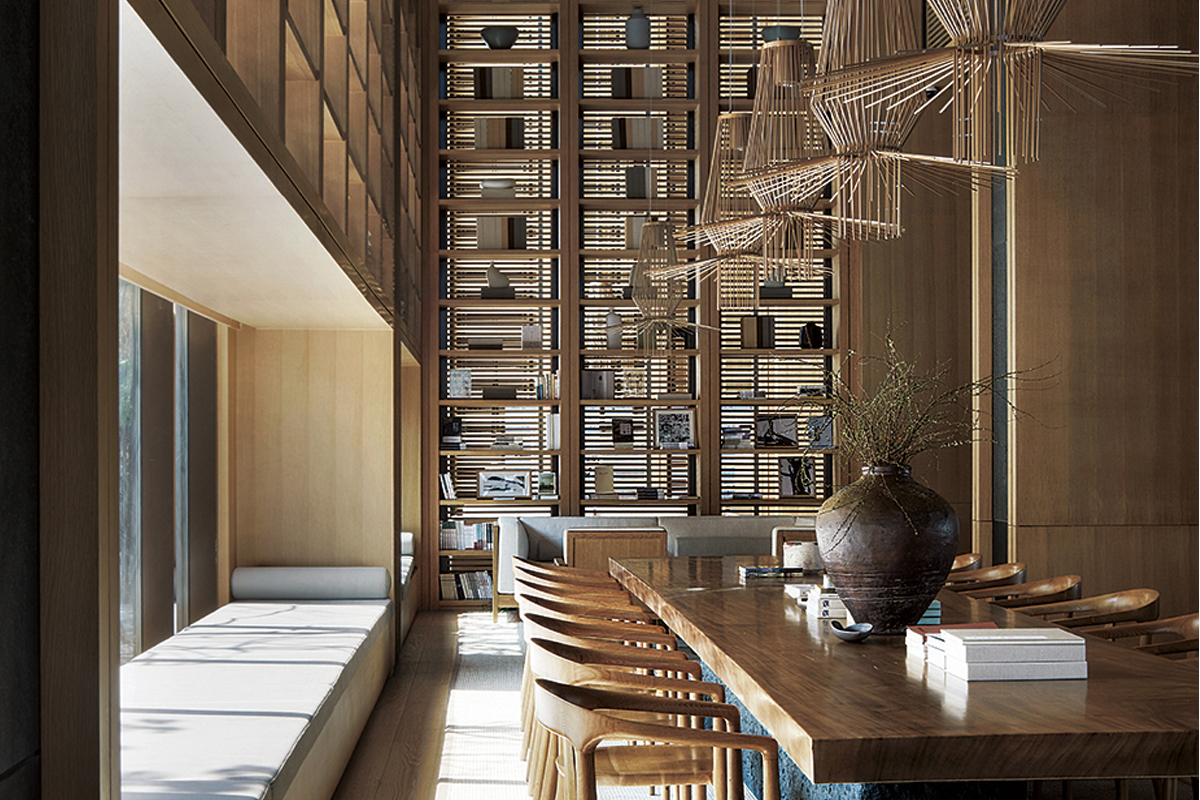 Contemporary visual language is applied in pursuit of Chinese spiritual traditions and continue “image in meaning” in the design. Each visual element is a unique spiritual and poetic expression, which responds to our ever-present longing for aesthetic satisfaction and desire for sentimental resonance. The exquisite combination between spatial perception and natural spirituality, between traditional sentiment and contemporary aesthetics, serves as an attempt at inheritance and sublimation. Drawing on the essential traditional artistic conception of Eastern culture, it develops and advocates a high-quality Eastern lifestyle and a harmonious modern design. 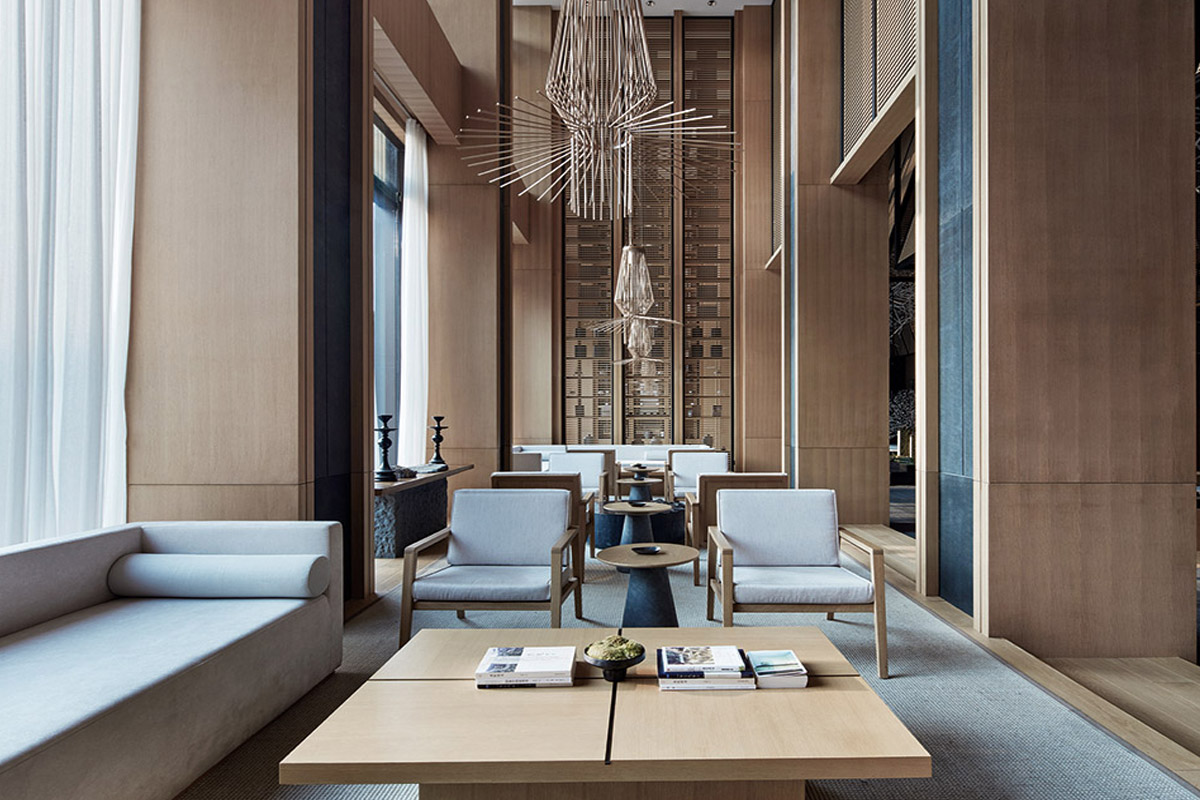 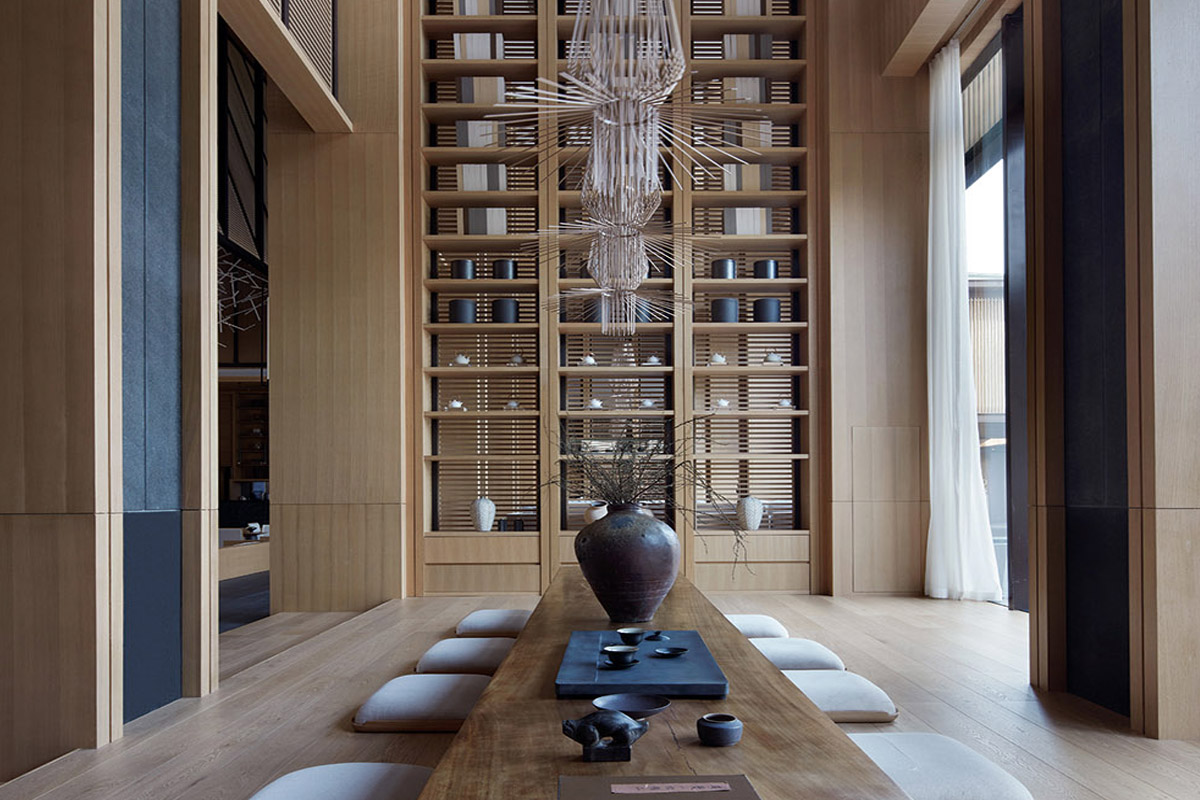 Bearing in mind the functional requirements, the designers transform the physical space into a spiritual and sentimental retreat, which allow visitors to savor the unique poetic and artistic meaning in simplicity and tranquility. They transcend the boundaries between tradition and modernity, between dream and reality, to unite aesthetics with life. They provide people living a busy life in the hustle and bustle of modern cities with a spiritual home, where they may embrace nature and their true selves in an artistic and well-balanced space.
이지민
ixd.jmlee@gmail.com
Yi CHEN + Muchen ZHANG
Project name: Jinan Bocuishan Sales Center
Design scope: Interior Design
Project address: Shandong Jinan
목록
HOT ISSUE
ADIDAS X INSEP (1)
ARG HEADQUARTERS (2)
ASICS EMEA HQ (3)
T3 (4)
THE PERFECT-IMPERFECT HOUSE (5)
ARCHIVE
More than 100,000
high resolution images
ABOUT US